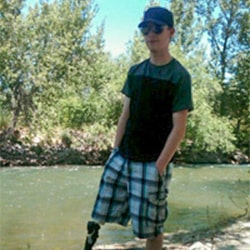 My name is Kim, I live in Boise, Idaho and I am the mother of a cancer survivor.

On September 11, 2008 Ty was diagnosed with Osteosarcoma in his right Tibia, Ty was 13 at the time. Of course this was a shock for all of us. We were living in Idaho at Mountain Home on the Air Force Base. Fortunately we caught it early when we noticed the bump on his leg. A few months into treatment Ty had to decide what type of surgery he would have to remove the tumor. Ty was treated at Primary Children’s Hospital in Salt Lake City, Utah with Dr. Randall. Ty chose to have his leg amputated over limb salvage surgery. He knew that there were risks of other complications that went with replacing his tibia and knee and many other surgeries that he was just not willing to put himself through.

On January 22, 2009 Ty became an amputee along with being a cancer patient. His treatment and recovery went rather smoothly. He had it a lot easier than most kids who go through cancer treatment. He never had to have a blood transfusion in the 10 months of chemo, nor did he need to have platelets or be admitted to the hospital for anything other than chemo. Ty was known around the hospital as ” the kid with the funny shirts.” He kept a sense of humor about his situation no matter how he was feeling or what he was going through. Ty always found a way to make people laugh and to laugh a little himself.  Ty finished chemo July of 2009 and is cancer free.

I like to think things happen for a reason and for some reason this past week ” Trevor’s Trek Foundation” had been brought to my attention more than once. I felt compelled to tell my son’s story after visiting the Trevor’s Trek website and seeing the great work this foundation is doing on the Children’s Cancer Pavilion at Julia Davis Park in Boise. Thank you for letting me share Ty’s story.