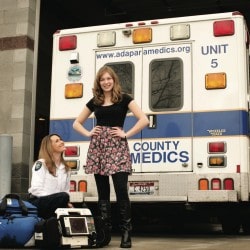 At 14 years old, Paige was diagnosed with thyroid cancer.  Her entire thyroid had to be removed.

Annually, I have my check-up with my pediatric doctor. I went to my appointment for my fourteenth year and everything seemed to be perfect. Out of the blue a month or so later I got a call from my doctor recalling that she forgot to tell us that she thought my thyroid felt lumpy. At the time, I didn’t think much of this because I didn’t know what my thyroid was. It turns out one’s thyroid is an organ that controls their stress levels, tiredness levels, and metabolism. After hearing this news from my pediatric doctor we decided to investigate it further to make sure there was nothing wrong. I first visited my Ear Nose and Throat Doctor who suggested that I have it ultra sounded. That led to seeing an Endocrinologist, which led to having my thyroid biopsied.

A biopsy is when a sample of one’s tissue is taken from a certain area to be tested for certain malfunctions within the cells. My biopsy would test my thyroid tissue and determine whether I had a disease called Hashimoto’s or cancer. After explaining this to me my endocrinologist added that I shouldn’t worry too much about cancer because at my age I had a less than 5% chance of having it. On November 23, 2009 I left early from school to get my biopsy. I tried to be as optimistic as possible and was hoping that the biopsy would be done quickly and I could play in my basketball game later that evening. The ultrasound prier to the biopsy went well. The doctors decided anyway to biopsy a spot on my thyroid that contained calcification, which is a red flag for cancer. My doctor was very kind and comforting and told me that once the results were received that he would call us personally.

I did not get to play in my game due to risk of internal bleeding, but I loved getting the chance to watch my team. When I arrived home that night my parents took me into our study and announced to me that I was diagnosed with thyroid cancer. From the moment I heard those words leave their lips I felt no fear. I knew God was by my side and would help me get threw it. What I was more worried about was those around me having to suffer because of what happened to me. The surgeon decided that I would need to have my whole thyroid removed in order to eliminate the cancer. The surgery date was set for December 11, 2009. Leading up to the days of my surgery I cannot describe in words the love that I received from my family and friends. My walls were filled with cards, my room was decorated with hearts, and my family and I received many meals from friends. I don’t think I have ever felt more safe and close with the Lord as I did then.

I continued to pray and by the morning that my alarm went off to head into the hospital I had complete confidence that everything was going to turn out just fine. The surgeon did have to remove my entire thyroid, and while in the process, discovered that I had Hoshimotoes Disease. It was a complete blessing that the doctors had discovered all these problems so early on. I had about three weeks of recovery and then was back to basketball. Daily I take a thyroid pill to replace the hormone that it released for my body. It took about a year and a half to finally get these pill levels normal, but now I feel healthy and strong again. Looking back at this experience I am so thankful for everything I learned from it. The bible quote, “Trust in the Lord with all your heart,” really helped me put everything in God’s hands through this time. I also learned many valuable lessons like living each day to the fullest and being the best person I can be, because no one ever knows when life will take them by surprise. Although, the main lesson I learned was to always be thankful and make the right choices since I get the chance to make them. I am so thankful for my family that helped me through this time of my life and I hope to one day help others that go through the same situations.