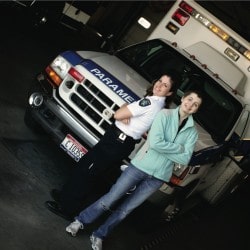 At age 15, Morgan was diagnosed with Medulloblastoma (brain cancer).  August 25, 2008 was supposed to be Morgan’s first day at Boise High School, unfortunately she was sick. Morgan had been experiencing odd flu like systems for 6 days.  We went to the hospital and were told she had a bad virus and that she would get better. On the 26th we were back at the hospital and this time we were told she had a brain tumor. On August 28 she had 11+hour brain surgery and we were told she had cancer, Medulloblastoma.  Fourteen months of treatment and she is cancer free.

Before cancer Morgan was an accelerated student and a triathlete. Morgan finished one duathlon and three triathlons before her 15th birthday. Now she is trying to regain her balance and her ability to ride a bike. Cancer changed Morgan from an avid athlete to a spectator, cheering for those able to participate. We all hope that one day she will be able to complete another triathlon.  Morgan was a grade ahead in Math and Science and that allowed her to stay with her class and graduate on time from high school May 26, 2011.

Don't Drop the Ball on Children with Cancer!