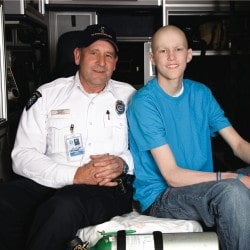 At age 14, Mitch was diagnosed with Burkitts Lymphoma (cancer of the lymphatic system).

Mitchell and his family live in Glenns Ferry; when it became apparent that he would be in the hospital for some time and having pretty aggressive chemo, the family relocated to Boise; and, we relocated to Boise from West Linn, OR.  Our task was to find a place for us all to live and we had just a couple of days.  We found a wonderful townhouse on Bogus Basin Road and we all (6) moved in together.  Mitchell had his own room and bathroom when he was able to be at home.  The other two children in the family, Maxwell,10 at that time, and Madeleine, 7, had to start school there and find althletic teams to be placed on.  It was almost mid-August and teams were full.  My other daughter and her family were there at that time, got on her laptop and wrote to the head of the Athletic Dept. for Boise School District and both were placed on teams immediately;  Maxwell, on football, and Maddi on a soccer team. Part of why I tell you this is because the outreach of the community, the teachers and staff in the school they attended, and everywhere we touched someone through neighbors, the small drive-through coffee close by, the YMCA, etc. all jumped on board and were absolutely amazing.  Through our friends in Oregon, their friends in Glenns Ferry, and of course our own family came together and the support through cards, prayers, generosity of time, kept our spirits up and rekindled one’s faith in people.

During the summer of 2009, Mitchell was 14 and was playing basketball in a tournament during the fourth of July celebration in his home town of Glenns Ferry, ID.  He was also playing baseball during the summer as he usually did.  He was looking forward to being a freshman that fall when school started.  He is a normal teenage boy, energetic, loved sports and was a good athlete.  He was strong, quick, and had decided baseball was his favorite sport.  He also plays football, basketball and wrestles.  That summer he seemed to be more tired than usual and his agility/quickness was missing.  He had complained of a number of things, including his back hurting.  He was so busy, and sometimes playing two sports at once, so his parents thought it normal to be tired because he was also growing and wore a size 12 shoe.

On August 8th, during that night when he got up to go to the bathroom, he fell on the floor; he had lost the use of his legs.  The next day it took both mom and dad to get him bathed and dressed and to St. Luke’s emergency room in Boise.  After just a few tests, an MRI was ordered and it was determined that he had three tumors on his spine.  He was in surgery later that night to remove two of the tumors.  One was left, which was at the base of the spine behind the tailbone.  The incision was approximately 20 inches and it was a very delicate procedure with two specialists present.  He was in the pediatric ICU for his recovery and was to begin Chemo immediately. It was determined that he had Burkitts Non-hodgkin’s lymphoma. This is a very aggressive and somewhat rare cancer that strikes children between 12 and 16.  It was somehow linked to Mono which we didn’t realize Mitchell had ever had mono; however, DNA testing proved that he in fact did have mono at some time.

The protocol that the hospital staff and doctors followed were from a team of doctors from the National Pediatric Oncology Board. They literally went by the book on his treatment based on their experience with this type of cancer. He underwent months of chemo treatments administered through a lumbar puncture directly into his spine. He was a very sick boy and had so many horrific side effects.

When he began this ordeal he weighed about 150 lbs. and at the end of the treatments he was somewhere around 112 lbs. For a boy that is 5’10″ that is a bit scary. He was thin to begin with but looked so gaunt at the end. He had several more surgeries, on the rectum, knee, back, due to the complications of the chemo or the meds. Spent a week, twice a day for 2 hrs each time in a hyperbaric chamber. He had to be transported there and the ordeal exhausted him. He missed his freshman year in high school; he did go to prom and it was so good to see him in a tux and ski hat because he was hairless everywhere.

Mitchell is now 15, he goes to MSTI every month to have blood work and check-ups; has an MRI every three months, and he is cancer FREE!!! he has grown, which they weren’t sure would happen because of the chemo and surgeries on his knee (twice) for osteonecrosis. These suregeries were close to the growth plate. They also had to drill his thigh to keep the infection from spreading.  He now weighs about 170 lbs. and is about 6′ tall. His shoe size is 13 1/2.  His last chemo was in April of 2010. He has also been released to play baseball and he is absolutely amazing.  He still does not have any feeling in his feet and up the calf about mid-calf but even the coaches can’t tell. Mitchell now has a full head of hair, curly, which exasperates him but we’ll love every single curl on his head and are so thankful for his recovery and I have been blessed to watch him play in his first baseball game this year.  I watched him run from third and slide headfirst into home…..and I cried.