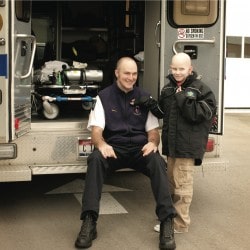 At age 8, Andrew was diagnosed with Medulloblastoma brain cancer.

Andrew was 8 years old, and the sweetest, most loving child you could ever imagine when he was diagnosed with a brain tumor September 27, 2008. We’d all noticed that Andrew was a bit clumsy, and even joked about it with him, but thought nothing major of it. There are lots of kids that are not overly coordinated at his age. However, his uncoordinated movements began to look a bit different. Kids at school were even teasing him because of the way he walked. The catalyst to get him checked was a homework session with his mom. She noticed that he could not write legibly and was having a hard time reading, even though he had always been an advanced reader. The next day she stopped by to talk to his teacher and discovered that she had noticed a significant deterioration of his handwriting and that he couldn’t even hold scissors.

I immediately took him to the Doctor, and they performed an MRI of his brain to see if they could determine the cause of his loss of motor skills. They discovered a large tumor covering 70% of his cerebellum.  After finding the tumor, it was discovered that there was extra fluid on his brain, increasing the pressure to a dangerous level, so the first priority was to relieve that pressure. They drilled a small hole in his skull to allow the fluid to drain, and his motor skills immediately already improved. The next step was surgery to remove the tumor and determine if it was cancerous.  After a torturous surgery, the surgeon came out to give us the full update on the outcome of the surgery. He informed us that Andrew’s tumor was in fact Medulloblastoma cancer.  Andrew began his radiation treatments the last week of October 2008. He received the maximum dosage a person can receive in a lifetime in one month’s time.  He had his first of twelve doses of chemotherapy starting in November.  At first, the treatments did not affect him more than just making him tired and bald.  However, after the second dose the nausea kicked in.  Andrew began to throw up multiple times during the day.

In March of 2009, he was becoming so malnutritioned that he had a feeding tube put in his stomach to get him the nutrients he needed.  Andrew began throwing the tubes up on a regular bases, so the tube was moved to his digestive tract.  This continued for a couple more months. Nothing was working, Andrew was only means of receiving nutrition was thru an IV administered twice daily.  It wasn’t until the middle of November that his digestive tract began to function again, to our great relief!  Andrew completed his cancer treatments in December of 2009, and has been pushing himself to have a life outside of cancer ever since.  He has a strong desire to share his story and enlighten others who experienced cancer.  He has spoken at St. Baldrick’s Fundraising events and at Boise State University about his fight with cancer, and those who helped him get through it.

He participates with Trevor’s Trek Foundation to help increase community awareness of cancer prevention through legislation and education, and was even featured in The Trevor’ Trek Children’s Cancer Survivor Calendar.  It has taken time for Andrew to regain his strength and energy, but he is now able to run, which he loves to do! Andrew hopes to be able to play basketball once he is a little stronger.   He was able to discover a talent and affinity for skiing thanks to Camp Rainbow Gold, and is looking forward to doing it again in the future.  He loves reading now that his double vision is gone, and is starting a new book every couple of weeks.  Currently reading Harry Potter and the Deathly Hallows, which he sometimes reads out loud to me with great enthusiasm.  He participates in his school choir and volunteers every opportunity he can for class activities.  He loves playing fetch with his dog, Oliver, and playing games on his DS and Wii.

He is looking forward to the summer and going camping in a tent, something he hasn’t done since he was diagnosed. He’s looking forward to swimming, which he would do every day if he could.  We are working on getting him a 3-wheeler bicycle since his tumor has prevented him from having the balance to ride a regular 2 wheeler. With all these challenges, Andrew is not discouraged and looks forward to any opportunity he has to explore life and experience new adventures.