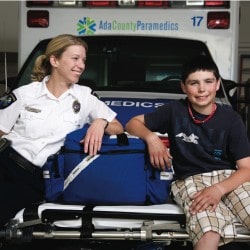 On July 18, 2008, Zach was diagnosed with Acute Lymphoblastic Leukemia – T Cell when he was 11 years old.

The  week he was diagnosed, he was playing on the West Valley All Star baseball team and was competing in the District Championships.  He had pitched and was playing great.  He was tired and felt like he was catching something so we took him to St. Luke’s in Eagle.  After he was examined, we were sent down to the ER at St. Luke’s in Boise for more tests.  After taking blood work, urine test, chest x-ray and an ultrasound, the ER doctor came in and told me that Zach’s white blood cell count was very elevated from normal and they believed it was leukemia.  The diagnosis was confirmed later that day and Zach immediately started chemotherapy and was in the hospital for six days getting treatment.  Within the first week, his body responded very well to the treatment and he was considered to be a “Rapid Early Responder” which was great news for his overall treatment and prognosis.

Zach was on a very intense treatment protocol for the first ten months of his treatment .  He received both oral and iv chemotherapy and also radiation treatments.  The total length of treatment for this type of leukemia is three years and three months.  Zach is in the last stretch of his treatment with only two more spinal taps with chemo to go (he has had 26 already) and the end of his oral chemo will be the first week of November, 2011.

Zach has been back to school full time for the last two years and is doing awesome.  He has continued to gain strength and endurance as well and is growing like a weed.  He earned a spot in the National Junior Honor Society for his 4.0 GPA last year and is also back to playing baseball, basketball, golf and skiing.  Zach turned fourteen in March, will be completing Eagle Middle School in June, 2011 and will start at Bishop Kelly High School in August, 2011.

Zach Taylor is 13 years old. He was diagnosed with ALL (Acute Lymphoblastic Leukemia) at age 11. Zach enjoys golf, baseball (Boston Red Sox is his favorite team), skiing, and playing with friends.